Home / About Us / Our Story

Never ask for things unless you are ready to receive them.

It all started with a tiny request. Before co-founding Deafinitely Dogs!, Lorette Vanourny had a meeting with a client. The client and Lorette instantly bonded over their love for animals. The conversation turned to service dogs. Lorette had worked with animals her entire life, but not as a career.

In a follow-up meeting, the client asked Lorette, “What have you done to start training service animals?” Lorette said she was thinking about it, but that it didn’t seem possible at this point.

Lorette told her sister and co-worker, Sherry Steine Ross, of the conversations. Sherry had always said that if she won the lottery she would start a service dog organization. Months of discussions and thought went into how they could fit becoming co-founders of a new nonprofit organization into their busy lives.

After months of debate, Lorette pulled into her driveway on a Thursday afternoon and prayed for a very direct sign. “Send me a dog to my doorstep, at my house or the office,” she said. “I need a very clear sign that this is what we should be doing!” She kept that request to herself.

Friday came, but no dog arrived. The weekend went by, still, no dog came. But then, on Monday, her office IT guy, Joe, headed out to pick up lunch. He came back in and yelled, “Come out and help me. There’s a little dog at our doorstep and he’s afraid and won’t let me pick him up!” She knew her life was going to change from that day forward.

Forty-five minutes later, with the help of six habanero beef sticks to lure him in, Deacon entered their lives. Three and a half days after requesting guidance, we got our extremely clear sign. Lorette explained her request to Sherry—and an organization was born. We began our plans that afternoon.

Deafinitely Dogs! was formed through friendship, a dream, passion, and prayer—all delivered in a tiny package named Deacon. 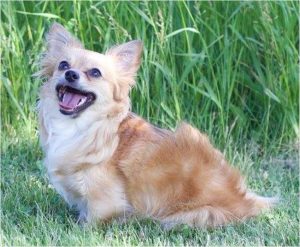 Get Our Monthly Updates:

We use cookies to ensure that we give you the best experience on our website. If you continue to use this site we will assume that you are happy with it.Ok